Happy 1st Birthday to My Fitness Book – Fit Armadillo
YOU deserve the freedom to tone up on YOUR terms! Sign up to start enjoying LIVE 1-on-1 fitness sessions TODAY  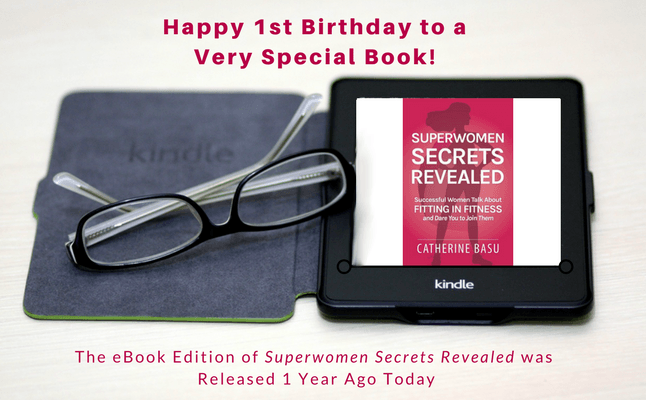 Believe it or not, one year ago today my 1st book, Superwomen Secrets Revealed was released as an eBook. To celebrate her first birthday, head HERE to grab a copy of the eBook (the version of the fitness book that's officially 1 year old today, December 7th, 2017) for ONE cent less than ONE dollar - just $0.99!

I wanted to take this time to say THANK YOU to everyone who was a part of the book launch team. Thanks to your efforts this past year, I was able to:

How Does a Book Celebrate Its 1st Birthday?

This secret is revealed in Superwomen Secrets Revealed's birthday video below:

Thanks for joining in on the fun of this day with us!

Don't forget to get your copy of the eBook for ONE cent less than ONE dollar to celebrate her 1st birthday HERE and tell a friend!

Happy Bday to Superwomen Secrets Revealed who was released as an eBook ONE YEAR ago today! Get yours: http://amzn.to/2gImve5 for #FitTips & #LifeTips

Looking for a unique gift idea for your workout buddy or a female entrepreneur? Hardback copies of Superwomen Secrets Revealed are available anywhere books are sold and are chock full of fitness and life tips. Fit Armadillo owner and author of Superwomen Secrets Revealed, Catherine Basu, also has a few copies on hand and would be happy to sign and dedicate one to your lucky friend. Head HERE to see if she still has any in stock!

What Will Superwomen Secrets Revealed Do Next?

She has several 2018 Book Tour dates lined up! Get on her email list HERE to be the first to know about event locations and times. She'll be in California in January, Connecticut in late February/early March, and West Palm Beach area of Florida in the middle of March.

Want author, Catherine Basu, to speak to your group in 2018? Send your dates and request to Info (at) FitArmadillo (dot) com. Her speaker reel can be found at the bottom of THIS PAGE.

Looking forward to another wonderful year thanks to your support!

How to Enjoy in Home Personal Training