Giving Back Through Running: Raising $25,000 for Charity with Dave Bloomquist – Fit Armadillo
YOU deserve the freedom to tone up on YOUR terms! Sign up to start enjoying LIVE 1-on-1 fitness sessions TODAY 

Giving Back Through Running: Raising $25,000 for Charity with Dave Bloomquist 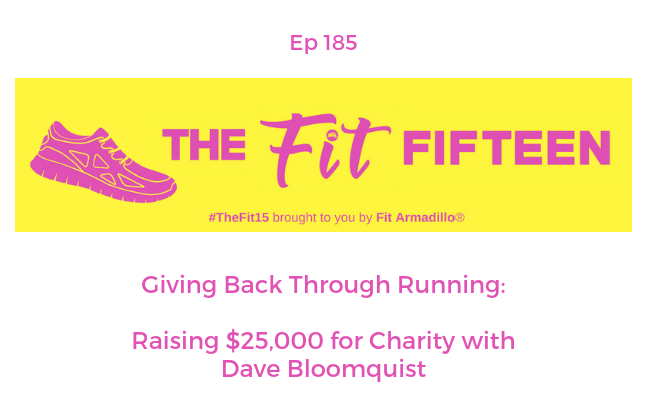 Think you're too old or inactive to run a marathon? Today's guest will challenge you to think again. Ten years ago couch potato Dave Bloomquist was 50 years old and getting lectured about his inactivity by his doctor. Today? He's run over 30 marathons, 50 half marathons, and countless other races. He is also a triathlete, having completed three 70.3 Ironman races and an RRCA running coach. What motivated Dave to start and and continue on his running journey? Find out in today's episode and what impressive goal Dave is chasing this coming weekend when he'll complete the London Marathon. In addition to Dave's personal fitness accomplishments, he's also been able to raise over $25,000 for various charities as he's participated in many of these races. Dave is quite proud of this and the new runners and athletes he's been able to support on their own journeys. We talk more about that in the second half of our conversation. Be sure to subscribe to listen to that and get some tips for your own fundraising by tuning in then. Dave started running ten years ago at age 50.  He progressed up the ranks from 5K’s to 10K’s and eventually marathons, all in about two years.  Since he started running, he’s run 30 marathons, over 50 half marathons, and countless other races.  He is also a triathlete, having completed three 70.3 Ironman races.  Dave is an RRCA certified running coach,  and a crew chief with the Atlanta Track Club.  He is working on completing the 50 States Endurance Challenge and this Sunday should earn his Abbott World Marathon Majors Six-Star medal in London.  He lives in Woodstock, GA, just north of Atlanta, and runs with various groups including the Atlanta Track Club, Roswell Riverside Runners, and Rogue Kennesaw Runners.  He is most proud of the nearly $25,000.00 he has raised for various causes through his racing.

Qualifying for the Boston Marathon with Katherine Wuestenfeld